Drug trafficking organizations are known for their ingenious methods of sending their products all over the world in hopes if minimizing law enforcement detection.

According to myjoyonline.com — a Cali-based drug cartel specialized in coercing women to get breast implants that were actually filled with liquid cocaine.

I gotta admit, this is pretty clever.

The group known as “The Surgeons” would allegedly recruit women and force them to get breast and calf implants for which they used prosthesis filled with liquid cocaine.

The women were promised well-paying jobs in Europe if they agreed to have cosmetic surgery in makeshift operating rooms in motel rooms or rented apartments.

BOGOTA, Columbia — Her talent for sniffing out drugs has led to the capture of at least 245 people and the seizure of 9 tons of cocaine from the powerful Urabeños gang in Colombia.

But now Sombra (Shadow, in English), a 6-year-old German shepherd who is incredibly popular among children and adults alike, is in danger.

The Urabeños mafia has put a bounty of 200 million pesos ($70,000) on her head, according to the Colombian police, so the dog had to be moved to Bogota’s El Dorado airport over fears for her safety.

Along with her usual handler, Jose Rojas, Sombra is now escorted by other officers to keep an eye on her, police said.

Over the past three years, Sombra has become “the torment of Otoniel, seizing 9 tons of cocaine,” anti-narcotics police said in a tweet.

Dairo Antonio Úsuga, alias “Otoniel,” is the head of the Urabeños, one of Colombia’s most powerful criminal groups and one of the country’s most wanted men.

She has already won two K-9 Medals of Courage for her valor and might get a third one this year, he said.

A hit on the dog? 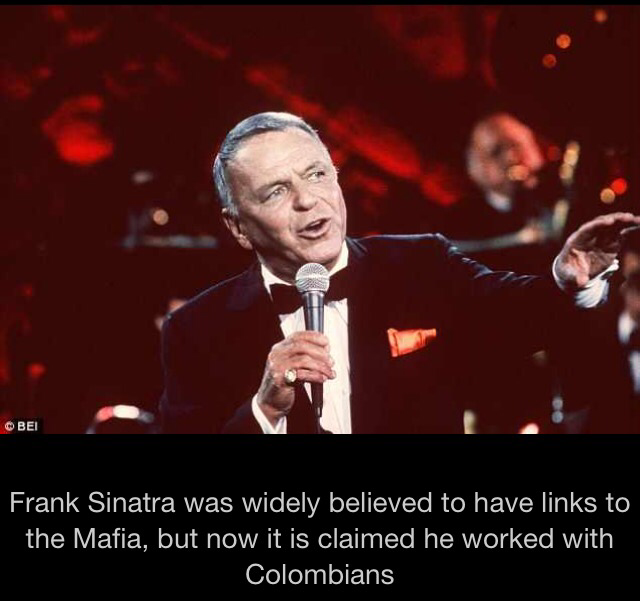 Sebastian Marroquín described the legendary crooner as a ‘better cocaine dealer than singer’ in an interview with a Brazilian newspaper.

He said the American artist was one of his father’s partners in Miami.

Asked how he could be so sure of the truth of his extraordinary claims, Marroquin told respected newspaper O Estado de Sao Paulo: ‘There are more singers than you can imagine that began their careers thanks to the sponsorship of drug traffickers.

‘There are no receipts, just words. I know because I was very close to my father and he and his partners always spoke about that.’

He added: ‘I can tell you that Sinatra was a better cocaine dealer than a singer. He was one of the partners of my father in Miami.
‘Drugs cartels only exist below Mexico’s border with the United States.

‘Where is the Miami cartel? Or the New York cartel? Who is the head of the Chicago or Los Angeles cartels?
‘Each kilo of cocaine that enters the United States is converted into eight with the help of poison.

There’s a great amount of hypocrisy when it comes to drugs.’

Frank Sinatra’s links to the Mafia have been well-publicised, although former 007 Roger Moore insisted last year the ties were exaggerated and were rumours based on unknown visitors having their picture taken with the singer in his dressing room.

A new Woody Allen biography published this week in the States claimed Sinatra asked the Mafia to murder the film director as revenge for betraying his ex-wife Mia Farrow.

Pablo Escobar’s brother revealed in his 2009 book about the drugs trafficker that they once dined with Frank Sinatra ‘on petty cash’ during a holiday in Las Vegas.

Roberto Escobar said the dinner took place in a private room at Caesars Palace and afterwards they took a scenic helicopter tour together.

But he claimed in the book – ‘The Accountant’s Story’ – that the American friend who introduced them told Sinatra the Escobars were real estate developers.

The meeting took place before Pablo, who at the height of his career supplied about eighty per cent of the cocaine smuggled into the US, became the name he is today.

‘It was an honour for us,’ Roberto said in the book.

‘When I met him I actually had goose bumps, but I had to be cool to maintain my position.

‘During dinner Pablo told Sinatra that we were going to make a helicopter tour the next day and Sinatra asked to come with us.

‘The next day Frank Sinatra became our guide as we spent about an hour and a half flying all over the area.

‘Supposedly, after Pablo became infamous our friend who had arranged this got a phone call from Sinatra.

‘I’ve been watching TV’, he said. ‘Is that Pablo Escobar the guy we met in Las Vegas?’

‘I don’t know what happened after that, but I guess Sinatra said very firmly that he didn’t want to be associated with Pablo. And until now he never has.’

Sebastian Marroquin is one of Pablo Escobar’s two children.

The drugs lord died in a shootout on a rooftop in the Colombian city of Medellin after making a phone call to his son which enabled the authorities to track his location.

Sebastian, who was 17 at the time, fled with his mum and sister to Mozambique before emigrating to Argentina where they are now based.

He apologized to the sons of victims his late father ordered assassinated during a 2009 Argentine TV documentary.

He also wrote a best-selling book called ‘Pablo Escobar: My Father’ published last year using his birth name Juan Pablo Escobar instead of the alias he adopted before going on to study architecture.

The 38-year-old maintains his dad was not killed by police as Colombian authorities say, but committed suicide by shooting himself in the head.

*This article was originally posted on The Daily Mail.