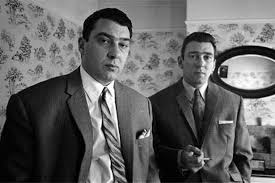 Ex-gangland leader talks about the twins’ violent past.

Kray, 61, also disclosed that he and his brother, Ronnie, who died of a heart attack 11 days ago, had a “premonition” that something bad was going to happen.

The gangland leaders were given life sentences in 1969 for killing Jack “the Hat” McVitie who was knifed to death. Ronnie was also convicted of the murder of George Cornell, whom he shot between the eyes in the Blind Beggar pub in the East End of London after being called a “fat poof”.

Reggie Kray, the man whose words and deeds once terrorised the London underworld, said yesterday: “I have got no regrets, my brother didn’t have any either. I have learnt over the years, as did Ron, that there are many people worse off than us. A lot of people have no choice but we did.”

Speaking at Maidstone prison in Kent, in the first full interview since his brother’s death, he added: “I would not change anything. You can’t just select parts of your life and alter them. I know Ronnie would not have wanted to change anything as well.

“It does not mean to say that I enjoy the fact that I committed a murder but you can’t select the parts of life that you do and don’t want.”

For much of the Sixties the Krays ruled large parts of the capital through extreme violence and fear.

Kray, whose body still looks tough and hard from his daily regime of cold showers and working out in the gym, still believes – despite 27 years in jail – that the twins were not evil.

“Ron and myself wrought some violence on different people, but we lived in a violent world and violence has been perpetrated on us as well. That was the way of life in the East End of London then.

“I’ve met people inside who have become part of my family – if I hadn’t done what I did I would never have meet them. I feel I have been blessed.”

Dressed in shorts, Reebok training shoes, a blue shirt, leather waistcoat and gold jewelry, he said he had been in almost daily contact with his twin brother, who was diagnosed a schizophrenic, until the day he died. They were allowed to speak on the telephone every Thursday and wrote almost every day. “He was okay when I spoke to him last, although we had a premonition that something was going to happen,” he said.

But after being allowed out to see his brother’s body last Thursday Kray said he knew he was at peace. “Being twins there’s a certain amount of telepathy. I know he is at ease.”

He said his concerns about the possibility of foul play in his brother’s death had been resolved after he was sent the doctor’s report that showed Ronnie died of a heart attack.

He has instructed his solicitor to investigate his brother’s inquest, in which a coroner took three minutes to return a verdict of death by natural causes. Kray added: “If I’m not satisfied I will take action.”

Staff at Maidstone jail said yesterday that Kray was now a model inmate. One officer said: “He’s an elderly gentleman now. He’s as good as gold – if every prisoner was like him there would be no problems here at all.”

Ronnie and Reggie Kray were both gay and Ronnie never consummated his marriage, according to  new claims made by an ex-enforcer for the pair.

He claims that although Ronnie admitted his homosexuality in his mid-teens, his brother Reggie was also gay and his marriage to Frances Shea was a sham. 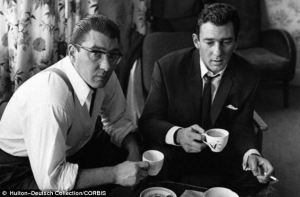 Ronnie and Reggie Kray were in the organized crime scene in the London’s East End during 50s and 60s. Photo: Corbis

Read the full story on The Daily Mail UK

Kate Kray, wife of one of the most notorious gangsters of London journals about her memories married to 1/2 of the Kray twins. Gold designer watches, Armani ties, bespoke suits, a clock that looks like a canary in a cage – and the bayonet he used on his victims. END_OF_DOCUMENT_TOKEN_TO_BE_REPLACED 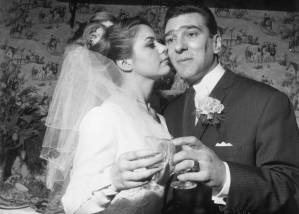 Reggie Kray slept with armoury of weapons by his bedside, a diary written by his late wife, Frances Shea, reveals.

Shea was married to the East End gangster for two years, before dying of an overdose when she was just 24.

She first met Kray at the age of 16 and married him in 1965 when she was 22. Her five-page diary – which was auctioned off at Gorringes of Lewes, East Sussex – highlights the difficulties with living with her then husband.

“(He) came back night time. By the side of bed gun, sword, knife, chopper, flick-knife,” she wrote.

“He used to sleep with flick-knife under his pillow.”

Also being sold are 60 letters written by Kray to Shea before they were married and while he was still in prison. The letters start as light and chatty in tone, before fast becoming controlling and aggressive.

In one he describes his future wife as a “spiteful little tormentor” after she “humiliated” him by going dancing with her friends.

Her diary describes how isolated she felt living at their Marble Arch flat, repeatedly being subjected to his swearing and drunken, abusive behaviour.

“(Reggie) came in late every night drunk. Got up every morning two minutes to dress, left me all day came back late at night drunk.

“Went to his house – his brother walked in bedroom in underwear, swore at me.

“Went back to flat Marble Arch, came back night time.”

When she complained to her brother about the Krays gun collection, she was sworn at and the stash taken away by a local publican. Eventually, she was admitted to hospital “for some rest”.

“Him and his friend took me to the hospital, he was swearing and shouting at me in the car.”

“Couldn’t stand it anymore – left him. When I was packing my suitcases to leave he told me he would bring up fictitious characters against.”

Shea tried to get their marriage annulled on the grounds that it was never consummated. Eventually, she died following a fatal drug overdose in 1967.

She was buried in the Kray family plot in Chingford, Essex, although her family unsuccessfully tried to have her exhumed and buried elsewhere under her maiden name, Shea.

Ronnie and Reggie Kray with new wife Frances Shea in 1965.

“They had an unhappy marriage and it seems someone told Frances to write down incidents while she was trying to divorce Reggie,” said Jane Anderson, of auctioneers Gorringes of Lewes.

“It seems life with him was impossible. She spent most of her time alone in their flat and when he was there he was often drunk and he slept in a bed with various weaponry.

“When he was in prison it was safe for her to have a relationship with him.

“But on the outside, she was way out of her depth and was very frightened of Reggie, as anyone would have been.”