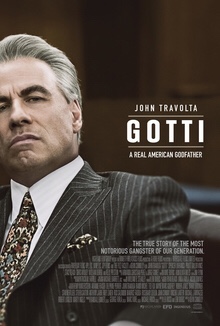 Gotti is a 2018 biographical crime drama film directed by Kevin Connolly and written by Lem Dobbs and Leo Rossi.

During the premiere 50 Cent flicked it up with John Travolta who portrays the legendary “dapper don.”

You gotta check out my John Travolta’s New movie Gotti he is great in it. pic.twitter.com/EYIVAVoitb

The film is based on the life of the infamous New York City mobster and his son, John Gotti Jr.

Speaking of Gotti, here’s me and John Gotti pic.twitter.com/AuumBSE175

50, who is executive producer of the hit crime drama thriller television series Power, is also set to produce his own crime mob docu-series based on the Black Mafia Family bosses Demetrius “Big Meech” Flenory and his younger brother Terry “Southwest T” Flenory.

The show is currently in preproduction and is also set to premiere on the STARZ network.

Check out the trailer for the new Gotti movie. Will you be watching?

Follow EverythingGOTTI for updates on the movie and the Gottis.