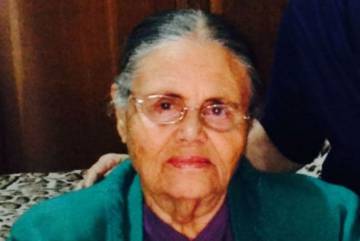 During an exclusive interview with TIME, the mother of notorious drug lord Joaquin ‘El Chapo’ Guzman shared what she thinks of her son.

Guzman, 61, is in New York City’s highest-security prison after escaping from Mexican prisons twice, once in 2001 and again in 2015. He is accused of trafficking drugs worth $14 billion into the United States. His is one of the biggest narcotics cases in U.S. criminal history.

LAWYER: El Chapo’s mental health is deteriorating while in prison

During the interview, Guzman’s mother, Consuelo Loera, 88, spoke about his childhood growing up in a mud-made shack in Mexico’s Sierra Madre mountains.

“They were difficult times. We longed for something better,” Loera told TIME.

TIME reports Guzmán helped bring food to the table by hauling sacks of oranges around the hills to sell to peasant farmers for a few pesos.

“He always fought for a better life,” Loera told TIME, “even as a small boy.”

TIME reports Guzman’s mother no longer lives in a muddy shack, but instead in a sprawling brick compound with guards outside on quad bikes brandishing Kalashnikov assault rifles.

“I just talked to him by telephone,” Loera told TIME. “He is putting on a brave face. He has always been someone who acts as if everything is fine.”

IN THE FAMILY: No one parties like the son of ‘El Chapo’

Dozens of other Mexican drug lords who have been extradited to the U.S. in recent years have pleaded guilty – usually, as part of deals. Guzmán however has declared himself innocent. Due to his plea, a trial is scheduled for September in a federal court in Brooklyn. Until then, he remains in the New York City prison.