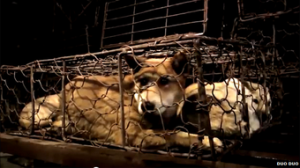 Thousands of dogs are sold from the black market, cooked and eaten in Yulin, in Guangxi province in southern China, as part of the city’s yearly dog meat festival.

Outrage on social media over an annual dog-eating festival in China has been growing every year – and this year it’s trended across the world. Will the anger eventually end the practice of eating dog meat in China.

Each year during summer solstice, it’s thought that 10,000 dogs are cooked and eaten in Yulin, in Guangxi province in southern China, as part of the city’s yearly dog meat festival. Although it’s not illegal to eat dog meat in China, opinion is divided on how deep the “tradition” really runs.

On Chinese social media in recent years, the Yulin Festival has become a focus for the large numbers of animal lovers – mostly within China – who are against it.But this year, the reaction has gone global. Since May, almost a quarter of a million tweets have been posted using the hashtag #StopYulin2015, with most of the activity coming from the UK, the US and Australia.

One of the loudest voices has been the US animal welfare group Duo Duo, whose change.org petition calling for the cancellation of the event has received more than 200,000 signatures. The group’s campaign video on YouTube has been viewed more than 130,000 times. 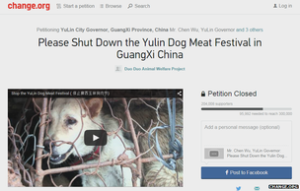 “I went to a slaughter house in Yulin a few days ago. The dogs and cats were wearing collars and of different sizes and breeds. They were very friendly,” says Duo Duo founder Andrea Gung. “Dogs are man’s best friend. To kill more than 10,000 of them in one day is wrong,” she says. Activists have also raised health concerns – although the meat is traditionally seen as having health benefits, campaigners claim the dogs transported into Yulin come from the black market and could be diseased. “The consumer thinks they’re safe to eat but they’re not,” says Gung.Duo Duo has intentionally targeted a Western audience with its social media campaign, rather than campaigning within China, as it says it doesn’t want to interfere with the activities of local activists. “The main thing we have done is made people in Yulin realise that their tradition is something from the past, that is perceived negatively from the outside world,” says Gung.