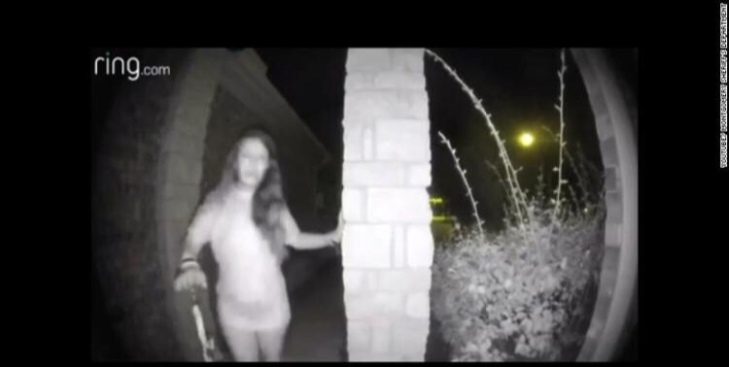 Hustlers, what would you do if this some weird shit like this happened at your crib?

Who knows if this is a prank or if it’s real, but do know I would not have opened the door let alone go outside — without the strap. #getthestrap

In all seriousness hopefully this young lady is ok. It’s crazy nobody ID’d her yet. No friends or family?

Check out the story on KTLA.

KTLA – A woman – barefoot and wearing what could be handcuffs -repeatedly rang doorbells at a number of Texas homes before vanishing into the night.

Now police in Montgomery County are trying to identify her and have released surveillance footage of her approaching a home.

The grainy video, captured around 3:20 a.m. on Friday, shows a woman walking up to a house and ringing the doorbell. She’s wearing a T-shirt, and appears to have some sort of shackle hanging from her right wrist.

“We were dead asleep in our beds. My husband was woken up by doorbell ring. It rang probably 20 to 30 times,” one resident, who did not want to be named, told CNN affiliate KPRC. “He walked outside, no one was in sight. It’s like she disappeared in thin air.”

Lt. Scott Spencer, of the Montgomery County Sheriff’s Office, said in a statement that police are investigating the “suspicious incident.”

Authorities have reviewed various images and have canvassed the neighborhood for evidence. Officers have inspected houses and conducted interviews with people who live and work in the area.

Spencer said the woman could be a crime victim who was seeking help, but warned that she also could be involved in some kind of scheme, so he urged residents to exercise caution, according to KPRC.

Residents in the subdivision are concerned. “I hope she’s OK and we get to the bottom of it and it’s no longer a mystery in our neighborhood,” Chris Geros told CNN affiliate KTRK.

Despite concern that the woman could be a missing person, no one has been able to make a definitive match. “There are no missing person’s reports from the area that match this individual,” Spencer’s statement said.