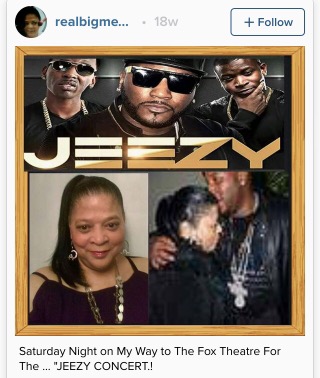 As he detailed in his verse on the “Hustlin” remix, Jeezy knows the real Big Meech, and with Mother’s Day still on the mind, the Snowman brought out Meech’s mother at a recent show in Detroit. The on-stage gesture and backstage interactions were well documented on Instagram, with Jeezy, Meech’s mom and Meech’s son all posting photos from the eventful evening.

“Me and momma meech laughed all nite catching up. Im her other son.”

“We Had a Good Long Talk After the Concert ..Talk About Old Times With The Fam in Atlanta .. Cali.. St.Louis.. Florida..’My Son ‘Big Meech’ Called On the Phone And it Was So Good to Talk to Meech.”

While he is currently imprisoned, Big Meech was a big supporter of Jeezy’s music career, and it’s clear that the Atlanta rapper hasn’t soon forgotten the endorsement. Jeezy last released Church In These Streets back in November, and performed a limited time concert series in support before taking things further on the road.

More recently, Jeezy appeared on Chris Brown’s “Wrist (Remix)” alongside Young Thug, and made his entire mixtape discography available to download courtesy of The Mixtape Lab. Peep the photos of Jeezy with Big Meech’s mother and son both above and below. It looks like the love was shared throughout, with Jeezy even commenting that Meech’s son had gotten so big since he last saw him.

We Had a Good Long Talk After the Concert ..Talk About Old Times With The Fam in Atlanta .. Cali.. St.Louis.. Florida.."My Son "Big Meech" Called On the Phone And it Was So Good to Talk toMeech .. "#Jeezy" .. #PutOnForMyCity .. The Big " D".. And Gave A Special ShoutOut to "#Big #Meech" and Detroit.! #ThankYouJeezy #ForMySpecialInvite #HadAWonderfulTime