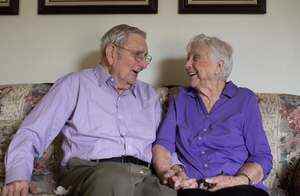 Sam and Wiloree Johnson in the living room of their home in Raleigh, N.C., on Feb. 3, 2016. (Jill Knight/Raleigh News

“She’s my first wife,” jokes Sam Johnson. “The only one I’ll ever have.”

Wiloree throws her head back and laughs. “Oh my,” she says under her breath while looking at Sam. It’s his favorite joke, even after 67 years of marriage.

Sam and Wiloree Johnson, both 91 years old, have a love story made for movie screens.

The pair met on Fayetteville Street in Raleigh the 1940s. Wiloree was with friends headed to the doughnut shop when Sam first saw her. He met them there and offered the girls a ride home, saving them the bus fare. The Johnsons’ children will tell you that “Momma pushed a friend out of the way” that day to make sure Sam was hers. She’ll laugh and tell you it wasn’t a push, but a gentle nudge.

Sam, an N.C. State University graduate who had recently returned from serving in the U.S. Air Force, had found the one that made his heart beat faster.

After wedding in Bethel Hill in 1948, Sam and Wiloree raised a family in Raleigh.

They’ve shared kisses on the Boylan Street bridge, held hands walking down Fayetteville Street and maintained a sewing machine shop in Raleigh for more than 50 years.

In a small concrete building just a stone’s throw from Lake Wheeler Road, you’ll find Sam even today sitting in the bright window light of the Archie Johnson & Sons sewing machine shop. Wiloree jokes that Sam “loves those sewing machines more than me.”

Each weekday, Sam walks a couple hundred feet to the shop to work on sewing machines. Wiloree works in the kitchen to prepare a big lunch for her husband and some of her grown children, who now lend a hand in the shop that was passed down to Sam from his father. They eat leftovers for dinner once Sam comes in from the shop and spend time watching TV together in the evening before bed.

Would they change anything about their marriage?

“When we lived out in the other house we had some kind of refrigerator that had a big old tank on it,” Wiloree said. “I would have liked to have had a better refrigerator.”

Theirs is a love so sweet the only regret is the quality of the appliances in the house years ago.

“I can’t be right all of the time,” she says, laughing.

“You just about are,” Sam adds.

By Jill Knight – The News & Observer