Well– remind me to never go to the hospital in Russia –even the doctors there are straight GANGSTA!

According to CNN, a Russian doctor has been charged with (manslaughter) after he allegedly “put hands” on a patient, beating the man to death! -No pun intended. Crazy thing here is he’s only facing 2 years! For manslaughter?!

Peep the story below and sound off in the comments. 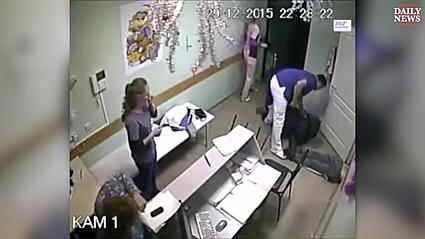 CNN– A doctor faces up to two years in prison for beating a patient who later died, Russian investigators said Saturday.

The man was beaten December 29 at Belgorod’s City Hospital No. 2 in southwestern Russia near the border with Ukraine. Officials opened a criminal case the next day, following an autopsy of the patient’s body, which revealed the presence of traumatic brain injury, the Investigative Committee of the Russian Federation for the Belgorod region said in a statement.

The doctor was fired and his actions are classified as negligence, since there is no evidence he intended to kill the patient, the Investigative Committee said.

The incident was captured on surveillance video and went viral on the Internet. The committee said the criminal case was initiated before the video surfacing online.

The patient entered the hospital and, in the course of a procedure, kicked a nurse, the Russian state news agency Ria Novosti reported, citing investigators.

The doctor found out what happened, came to the nurse’s defense and punched the man, who fell and hit his head on the ground, Ria Novosti said.

The doctor also hit another man who came into the room where the patient was beaten, according to Ria Novosti.

The surveillance video shows the the patient falling to the ground and the doctor trying to revive him with chest compression. It doesn’t show the patient kicking the nurse and investigators didn’t explain why that happened.

The doctor was placed under house arrest. Officials did not release the name of the doctor nor the patient.