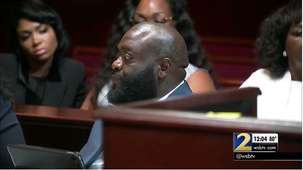 Rapper Rick Ross and his manager Nadrian James were in court Wednesday asking for immunity from prosecution in his assault case, citing Georgia’s Stand Your Ground law.

The rapper, whose real name is William Roberts, and James were charged with assault, battery and kidnapping in the June 2015 incident. The two are accused of assaulting two employees who threw a party at Ross’ estate in Fayetteville, GA.

The two say the man wasn’t doing his job. James said a car was parked in the guesthouse driveway and no one was answering the door.

“I wanted to know what was going on and why he didn’t open the door after I was knocking for 10 minutes,” James said in court.

When James finally got inside, he told the court he saw a woman, a child, a shirtless man and another employee run out of the house. That’s when a fight broke out.

The two employees said the rapper pulled out a gun and pistol-whipped them, causing one of them to have a chipped tooth and an injured jaw.
James said he never saw the rapper pull out a gun during the fight.