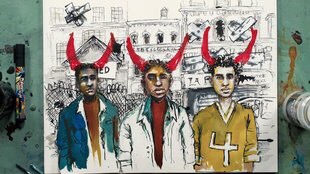 Check out this scathing eye opening short documentary in which Hov addresses the war on drugs in the U.S.

Why are white men poised to get rich doing the same thing African-Americans have been going to prison for?

This short film, narrated by Jay Z (Shawn Carter) and featuring the artwork of Molly Crabapple, is part history lesson about the war on drugs and part vision statement. As Ms. Crabapple’s haunting images flash by, the film takes us from the Nixon administration and the Rockefeller drug laws — the draconian 1973 statutes enacted in New York that exploded the state’s prison population and ushered in a period of similar sentencing schemes for other states — through the extraordinary growth in our nation’s prison population to the emerging aboveground marijuana market of today.

We learn how African-Americans can make up around 13 percent of the United States population — yet 31 percent of those arrested for drug law violations, even though they use and sell drugs at the same rate as whites.

Do you agree with Jay Z or nah?