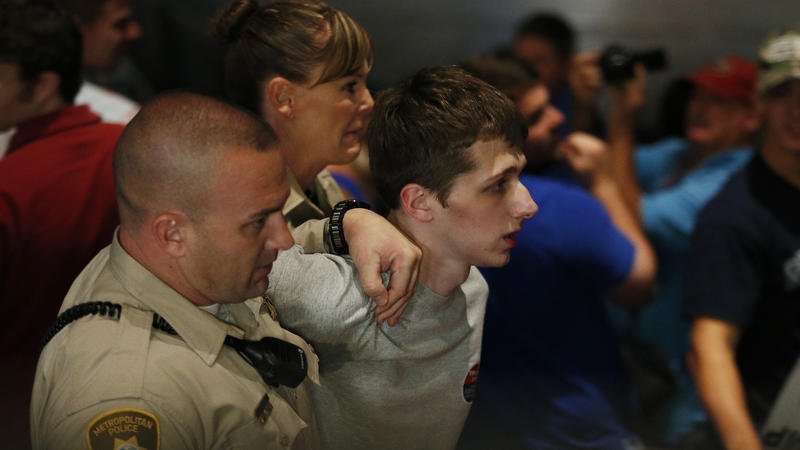 The man arrested for trying to disarm a police officer inside a Donald Trump rally in Las Vegas Saturday told authorities he intended to use the gun “to kill Trump,” according to a new criminal complaint.

Police arrested the 19-year-old after he attempted to pull a police officer’s gun from its holster inside a Las Vegas theater where Trump, the presumptive Republican nominee, was holding a campaign rally.
Police said Michael Sandford struck up a conversation with a Las Vegas Metropolitan Police officer under the pretense that he was seeking to get an autograph. During the conversation, police said Sandford tried to pull the officer’s service weapon from its holster. Other officers also assigned to provide security at the event were quickly able to detain Sandford and authorities said there was no further disruption to the event.

Sanford told police that he drove to Las Vegas from California “to kill Trump,” according to the complaint, after hearing a few days earlier in the news that he was expected there. On June 17, he practiced shooting a gun for the first time at a gun range in Las Vegas.

“Sanford further stated that if he were on the street tomorrow, he would try this again,” reads the complaint, obtained by CNN. “Sandford claimed he had been planning to kill Trump for about a year but decided to act on this occasion because he finally felt confident about trying it.”

He is expected to make his initial appearance in front of U.S. District Court Magistrate Judge George Foley at 6 p.m. ET Monday, according to a U.S. Attorney’s office spokesperson.

Sanford also told authorities that had he not tried to assassinate Trump at the Las Vegas event, he had planned to go to his next rally, in Phoenix, Arizona, and try again there.

Trump is under U.S. Secret Service protection but local law enforcement often supplements them at campaign events.
The Secret Service says it has charged Sandford with violating two federal laws following the incident, including assault, and he could face up to a decade in prison if convicted.

Many of Trump’s rallies throughout the campaign have been contentious, with protests both inside and outside the events. Secret Service agents had to run to Trump’s side during a campaign rally earlier this year in Ohio to protect him against a man attempting to rush the stage during his remarks.

Read the rest of this article on KTLA News