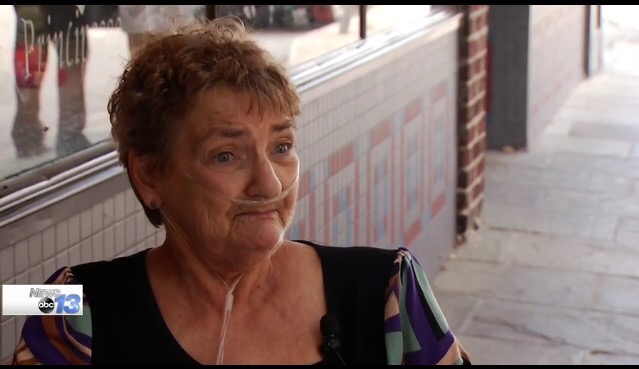 A woman protesting at a Donald Trump event in North Carolina on Monday night was allegedly assaulted by a supporter of the Republican presidential candidate.

“I said you better learn to speak Russian, and I said the first two words are going to be, ha ha. [The suspect] stopped in his tracks, and he turned around and just cold-cocked me,” Shirley Teter, 69, told the local ABC station WLOS.

Teter has chronic obstructive pulmonary disease and needs an oxygen tank to breathe, the Citizen Times reported. She told the newspaper she was in the hospital until 2 a.m., has pain in her jaw and can’t chew.

Authorities have issued a warrant for Richard Campbell, 73, of Edisto Island, South Carolina, in connection with the attack, WLOS reported.

Five other people were also arrested in connection with unruly behavior at Monday night’s rally. In one incident that went viral, a man was caught on video slapping protesters.

“People need to know what state of agitation [Donald Trump] puts people in,” Teter said, per the Citizen Times.

I have no words. Deplorable!