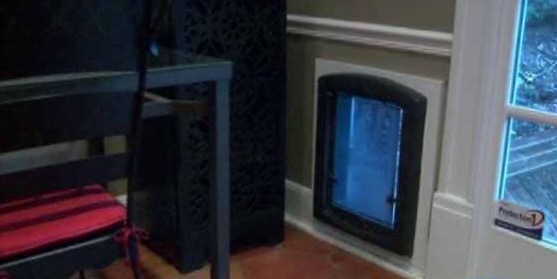 Ok! First of all, I didn’t know doggy doors still existed, or that people really still have them.

Second of all, you have got to be a skinny mofo to fit through a doggy door.

Third of all, how do you just make yourself at home so easily in someone else’s home? Especially when you are not invited or wanted there?

According to Channel 2 Action News (Atlanta)– A burglar decided a dog door would be the perfect way in to an Atlanta home.

Once inside, he helped himself to whatever he could fin, but one of those things he grabbed led police right to him.

“I cant believe this is happening to me.”

He said he never thought of the swinging dog door as a security threat until now.

Brian wants homeowners to beware of the unusual way a crook got into his place.

“Once we heard his voice and then him enter through doggie door, we knew somebody was in our house.”

He was in the next room when Michael King got on all fours and crawled into his house, leaving the family dog, Tipper, outside.

“I was terrified in my bedroom, underneath my bed. I was able to grab an alarm pad that triggered motion detectors.”

That was enough to trip the alarm which alerts police.

Brian said the crook stole his iPad, iPhone, wallet and other small items that were on the kitchen counter. And he says King didn’t hesitate to make himself at home.

“He kinda went straight for the fridge and grabbed a couple of beers and Red Bull then proceeded through the house.”

Brian said the crook left the same way he came in, but he didn’t get very far.

He used the “Find my iPhone” app to help police catch the man who crawled in to his home.

Brian plans to install a new dog door equipped with a security lock to make sure he’s safe.